Causes have effects; effects become causes.
For every action there is an equal and opposite reaction.

From west to east, from science to spirituality—on some level we all get this basic principle.

But for most of us living in modern techno-industrial (MTI) societies, it can be hard to really know this, to deeply feel and experience it as we go about the business of everyday life.

Feedback in our systems is often so distant in time and space that causes, effects, actions, and reactions can be hard to discern. When, for instance,

“actions that might appear utterly unrelated—say, driving a car down the New Jersey Turnpike and secreting a shell in the South Pacific—turn out to be connected,” [1]

we need some help putting things together.

The Law of Karma

Though often misunderstood and misrepresented, karma simply refers to the principle of cause and effect.

The inescapable fact is that everything we do has repercussions—effects that ripple out in our minds, bodies, lives and those of other beings and the world at large. To make matters more complex, those ripple effects are always intersecting.

In spiritual traditions based on the premise of karma, the aim of practitioners is to cultivate this awareness and to tame their minds and conduct in ways which produce the least harm and the greatest benefit. Science too enables us to understand this basic principle. For example:

Whether we’re thinking about this in a spiritual or scientific sense or both, it’s helpful to be able to imagine relationships among the impacts we most care about, but can’t see.

Especially needed right now is the ability to discern the larger pattern of relationships and processes among human activities and their effects on other people and the world.

Below is a satellite view of the basic pattern of socio-environmental processes [2]. In contrast with the usual side-by-side portrayals, it places human phenomena within biophysical conditions and time. This small-scale map is meant to support our capacity for seeing big picture, long-term, interdependent processes—perspectives which are not necessarily encouraged in MTI societies.

Its key elements, though conceptually separable, are in reality inseparable. And while they are ordered here according to the direction of conditioning influences, the phenomena they represent are occurring simultaneously in any given moment, albeit at different rates and scales.

This diagram represents one such moment in an ongoing series.

In it, biophysical conditions (of both human and non-human origin) are the medium of human social life. Of and within them, we go about the business of meeting our needs and wants.

As a particular variety of social organism, we are also utterly dependent on one another for survival, development, and other physical and emotional needs. Together the bonds we form in seeking to satisfy those needs and wants create dynamic patterns of interdependent relations, or figurations, of varying size and shape.

Growing up within certain biophysical and figurational conditions, individuals are engaged in social learning and develop certain schemas which together generate an overall way of being that feels like “second nature.” This dynamic system called habitus orients, and is expressed via, our activities (e.g., thoughts, perceptions, practices) and the products of them.

Individually and collectively, those activities and their products exert effects on other people and the world. Cumulatively, socio-environmental impacts influence the biophysical conditions within which figurations and habitus continue to form and change over time.

Of course, each dimension represents enormous complexity, with numerous processes taking place simultaneously. Still, this simple mental picture is enormously helpful for understanding long-term processes, stability, and change. As each moment emerges from the one before, existing patterns at multiple levels (e.g., relational structures, neural networks, embodied habits, normal practices) are reinforced or altered, or both. In this way, social change, at varying rates, occurs. 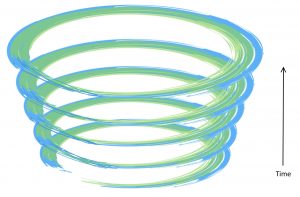 When society and environment, or humans and nature, are depicted as occupying separate realms we have to invent ways to “connect” them and to imply cause and effect. Likewise, when individual and society are assumed to be separate and opposed entities, their relatedness is a mystery.

Being able to picture these processes in ways that more closely align with how things actually work attunes us to important cause and effect relationships we can’t see from the ground in a given moment.

The world is already complex. We have made it exponentially more so. Without an accurate mental model of socio-environmental processes, our ability to see the consequences of human activities is obscured. Our power to intervene in problems, make positive change, and simply do the right thing is greatly diminished.

The paradigm shift this series advocates, on the other hand, supports our capacity for ethical action in today’s context, and in reality in general.

Want to bring these ideas to life in the classroom and beyond? Click below to access “In Practice,” a pdf containing some ideas for helping us practice our way into a new paradigm.

References
[1] Kolbert, Elizabeth. 2006. “The Darkening Sea: What carbon emissions are doing to the ocean.” The New Yorker November 20, p. 75.
[2] Introduced in Kasper, Beyond the Knowledge Crisis, chapters 5-9.