In English, we can say weird things like this. In many languages, however, “you couldn’t use that construction unless you are a lunatic,” says cognitive scientist, Lera Boroditsky in her popular TED talk, How Language Shapes the Way We Think.

Language has consequences beyond just how we say things. It influences what we pay attention to, shapes our patterns of thought, and delimits what we can think. Overall, language helps define our sense of place in the world and ways of being and doing in it. The relationship, though, is not a simple direct causal one.

Through learning and speaking a particular language, one absorbs the collective thought processes of a people. In this way, language reveals unconscious cultural assumptions and mental pictures of how the world works.

Language, in other words, is the cognitive infrastructure of our paradigms.

It follows that, in order to achieve the paradigm shift needed to transition away from the known dangers of the current modern techno-industrial (MTI) path, the language of MTI cultures needs some strategic renovation. It’s time for the abandonment of its poorly wrought infrastructure and its

“replacement with a framework that better reflects biophysical reality.” [1]

Here, I focus primarily on English. As the international language of science, the language of global business, and a language said to be basically taking over the planet, it bears a lot of weight. The faults in its foundation, then, are of great consequence.

The Limits of Modern English

For all of its richness and strengths, English has certain weaknesses — structural qualities that constrain its users’ abilities to think and speak about reality as it is. Here are a few especially relevant ones, some of which are shared across what linguist Benjamin Whorf called Standard Average European, or SAE languages.

As Whorf pointed out in the 1930s, the SAE microcosm analyzes reality largely in terms of things or substances. These spatial forms are envisioned to exist against some larger backdrop, like contents to a container.

This dichotomizing tendency has supported the philosophical views most characteristic to the “Western world,” including materialism, Newtonian physics, dualism, and everything that appears to be common sense and an inevitable product of intuition.

But these are no intuitions, says Whorf. “They are recepts from culture and language.” [2]

Indeed, Robin Wall Kimmerer observes that, being heavily noun-based, English encourages thinking in things. This, combined with the application of “it” as a pronoun to just about everything in non-human nature, has a de-animating effect. Overall, she notes,

“English encodes human exceptionalism, which privileges the needs and wants of humans above all others and understands us as detached from the commonwealth of life.” [3] 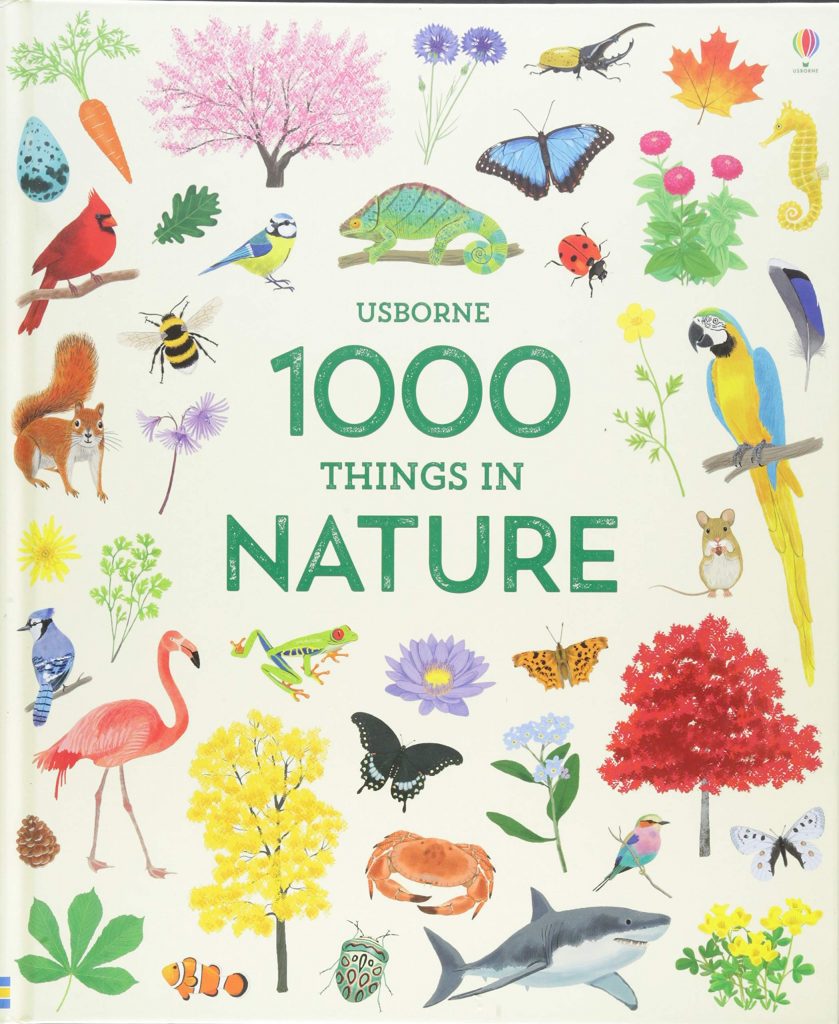 Importantly, the things that occupy the forefront of our attention within this linguistic structure tend to be depicted as things in a state of rest. Movement or change must be tacked on by means of a verb or some other addition. The river runs or the wind blows, for example, as if there could be a river or wind that stands still … until it doesn’t.

This feels normal to native speakers of these languages, but it’s in no way universal. In contrast, says Leroy Little Bear,

“Aboriginal languages are, for the most part, verb-rich languages that are process- or action-oriented. They are generally aimed at describing ‘happenings’ rather than objects.” [4]

This kind of conceptuality reflects a worldview in which existence consists of energy and all things are in constant motion. It requires one to look at the whole in order to see patterns.

The process-reducing effects of English (and other SAE languages), Norbert Elias points out, induce us to “draw involuntary conceptual distinctions between the actor and his activity, between structures and processes, or between objects and relationships.” [5]

These sorts of distinctions lent themselves to a particular way of knowing and are especially problematic for thinking about and describing human social phenomena and our place in the world.

The double role humans have in relation to themselves and everything else — as knower and known, experiencer and experienced, subject and object — was reified, through habits of speech and thought, into the notion that they are separate things.

In the context of certain historical developments in European cultures, the tendency to envision those things as existing against the backdrop of a container contributed to a sense of oneself as an “I” within a closed system. Relative to this, everything else was outside, including other “I’s”, society, and non-human nature.

However right this sense of things might feel to those accustomed to thinking about the world in this way, it does not express the real condition of dynamic interdependence among people and between humans and the rest of the world.

“Our words,” Elias says, are “not yet supple enough to express this simple state of affairs simply.” [6]

The above qualities characterize the linguistic foundations of the dominant social paradigm in MTI societies.

Despite in many ways knowing better, it remains difficult to convey the reality of relational processes via language so strongly oriented toward describing static, separate, and often oppositional things.

Altering such deeply engrained habits of speech and thought may seem like a daunting goal, until we consider the fact that we can and do regularly change our language to suit our needs. This prompts an important question.

What do we need?

Achieving the radical societal transformations called for requires that we operate in ways that better align with biophysical conditions. Knowing this, and that how we operate is strongly influenced by our conceptual infrastructure, helps us appreciate the need for more adequate concepts.

Solutions to the above problems — perceived thing-ness, stasis, and independence — are easier than we might imagine.

Having situated ourselves and our societies in the biophysical conditions which we are made of, emerge from, and operate in we are prepared to appreciate the need for alternatives to some of our most troubling concepts.
Below are a few suggestions for where to start.

Conventional Concepts and Their Alternatives

For over a century now, the term society has remained conspicuously ill- (or un) defined. It is invoked, in academic and non-academic circles alike, in ways that imply an existence out there, separate from the individual, with an agency of its own. “Society is to blame.” “That’s for society to decide.” “It’s the influence of society,” and so on,  we regularly hear.

If pressed, most of us could probably explain the more nuanced meaning of these ordinary phrases. But it remains the case that we carry around very distorted pictures of what “society” is and how we as individuals relate to it.

Society is not a thing or set of things external to individuals. What we call society is a dynamic pattern of bonds always forming and re-forming in response to people’s interdependence as a particular variety of social organism.

Elias introduced the word figuration as a term that captures the relational and processual qualities of human social life. Instead of connoting ideas of a static thing independent from us, figuration refers to the interweaving of human social life that is simultaneously always process and product. It encompasses the totality of participants’ dealings in their relationships with each other. 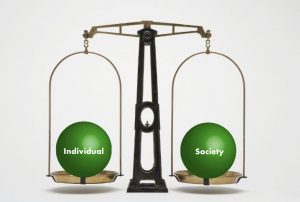 Unlike conventional uses of the term “society,” the concept of figuration makes the reality of dynamic human interdependencies explicit and central to our understanding of human social life. [7]

Within the conceptual infrastructure described above, the image of the individual as a mind in a body has taken on the character of a discrete and largely autonomous entity set in opposition to society.

As such, questions of the individual-society relationship — which comes first? how does stuff “out there” get “in here?” and vice versa, which matters more? — have long plagued western thinkers.

When we situate ourselves in biological and physical conditions, the riddle is easily solved. We remember that people do not come into the world as fully formed adults. Every person is born into and grows up within certain social contexts. And, given the particulars of the human organism (our “first nature), especially the human brain, social learning is a non-negotiable requirement.

What we learn, consciously and unconsciously, manifests as a system of schemas for how to operate and live in a given context. We experience this as a kind of second nature. [8]

From the Latin habēre (to have, carry, wear), habitus refers to the cumulative layer of embodied social learning which operates at conscious and unconscious levels to organize thought, perception, and behavior and orient our overall way(s) of being.

In contrast with the mostly static and separate thing-ness conventional connotations of  “individual” imply, habitus signifies a relational process, a complex and open system the ongoing product of which is an inherently social yet unique self which is engaged in co-creating, embodying, and expressing the social (i.e., figurational) conditions it is simultaneously shaped by and helping to shape.

This was a useful step in the right direction. And with the “it-ing” tendencies built into our language, thinking about “the environment” as a thing apart and distinct from us feels perfectly natural.

In fact, it’s quite misleading. Referring to the biophysical conditions we’re made of, emerge from, depend on, operate within, and impact as if they were separate and “out there,” obscures the reality of our situation. The problems that concern us are not just “environmental,” but are also inherently social.

The separation built into the words we use forces us to make up ways to somehow “connect” the two in our depictions of those relationships.

Socio-environmental (or something to that effect)

This is not to suggest that the word “environmental” loses all value. Of course, people will continue to specialize in studying and teaching the non-human aspects of biophysical conditions (e.g., atmospheric composition, water quality, ecosystem assessment), which may continue to be called environmental.

It’s only to say that being able to place these phenomena explicitly within a broader conceptual category helps us remember that the changes in them of great concern to us today in large part originate in and impact people and human social life.

*When referring to happenings which encompass all three phenomenal levels, it would be most consistent to use the term sociobiophysical. For now, though, it’s less of a mental stretch to integrate the human social dimension into already familiar terms.

New Concepts, New Ways of Being

As Elias observed, the complicated nature of many modern sociological theories “is due not to the complexity of the field of investigation which they seek to elucidate, but to the kind of concepts employed.” [9]

Likewise the troubled ways we MTI folks experience ourselves, others, and the world are due in part to the conceptual infrastructure through which we see and make our way.

Recognizing some of the fundamental weaknesses in our language helps explain those difficulties. Doing some strategic shoring up with alternative concepts can begin to help relieve them.

Certainly, restraint is needed. Too many new concepts at once can confuse and hinder communication. And wouldn’t it be nice if we didn’t need them at all? If we could sufficiently revise our understanding of existing concepts so as to make them more suitable for describing reality as it is. In principle we can, just not instantly.

Our conditioned understandings run deep and take time to change. In the meanwhile, especially in contexts where we’re trying to communicate more deliberately about dynamic interdependent sociobiophysical phenomena, we have some good alternatives at hand.

Words don’t necessarily make worlds. But they profoundly shape our ways of seeing and being in the world. A conceptuality better suited for reality can help us re-shape those in the ways circumstances are calling us to do.

Want to bring these ideas to life in the classroom and beyond? Click below to access “In Practice,” a pdf containing some ideas for helping us practice our way into a new paradigm.